The one thing that matters 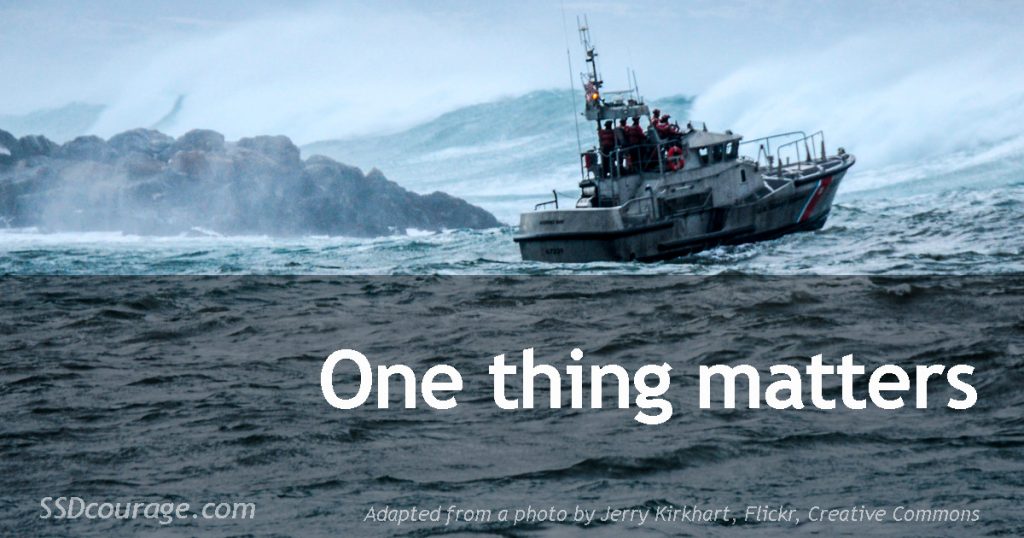 I don’t know what kind of life you are experiencing. You may have a charmed existence where everything goes right. Then again, maybe your life is more like mine—dancing through a minefield.

In 1982, I quit my job to move to Wisconsin and start a business. That business failed. I worked an entire year without making any money. My wife and I started a couple new businesses. They limped along for a few years until we had our first child in 1991. Then they fell apart, and we were left homeless with a baby for eight months in 1992. We dug our way out of that hole, and we were doing okay until just before Christmas 1995. The day our third child was born, I lost my job. Even though I was laid off (not fired), my unemployment claim was denied after one month of benefits. Zero income with three little children. Almost went homeless again, but managed to create another business that sustained us. Then 9/11 happened. My primary client depended on the manufacturing industry which nosedived after 9/11. Income back to zero. I tried to make it as a writer, went bankrupt, and almost lost our home. I picked up a janitorial contract and did some other odd jobs to get us back on our feet. Again worked on making it as a writer. But someone kept deleting my online ads (who knows why). Somehow, however, I managed to get enough business to survive just by word of mouth.

If I were to rattle off my adjusted gross income for each of the last five years, you would tell me I’m lying. You would say no one could survive on that amount of money. And, you’re right. It’s impossible. It can’t be done. But God is a God of the impossible.

My bills are mostly paid. I have enough food to eat, a home to live in, a mortgage that is mostly paid, clothes to wear, a car to drive. But even more important than that is this: I’m okay. I’m not stressed. I’m at peace. I like my life. Yes, I want to do better, but I’m deeply grateful for the adventure God has me on.

I’m only mentioning the financial challenges we’ve faced. There have been all kinds of other disasters; it would take pages to list them. But again, it’s all okay.

The Bible says that a righteous man may have many troubles, but the Lord delivers him from them all. I have another way of putting that: Everything can go wrong, but as long as one thing goes right, you’ll be okay.

PS. I just want you to know, I haven’t forgotten about you. I really like to get something out to you every couple days, but sometimes you need to just take some time out, climb the tallest tree, look around, and figure out which direction to go. That’s what I’ve been doing lately.

Bible trivia:
Answer from last time: Paul and Barnabas were the first Christian missionaries.
New question: What is the longest chapter of the Bible?