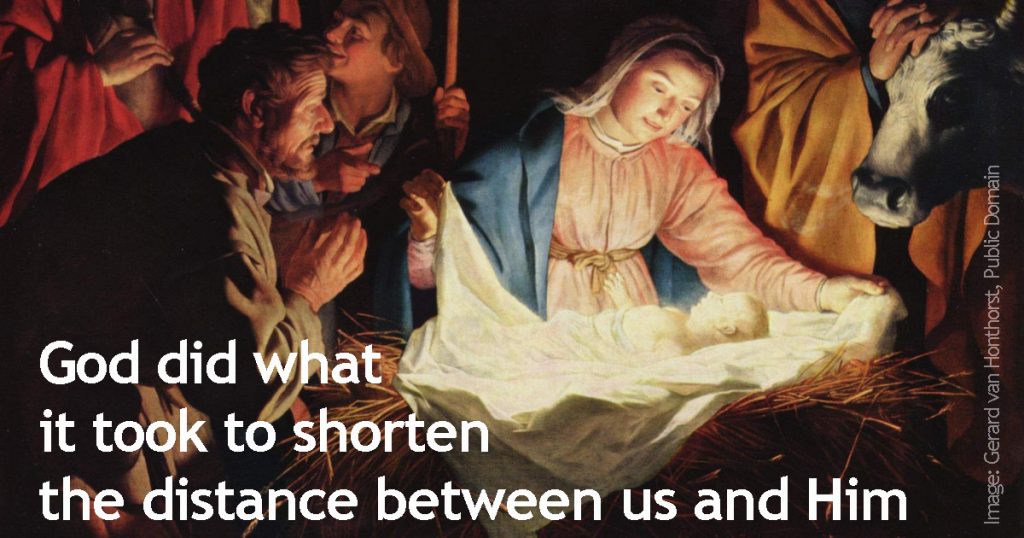 This goes along with the Biblical prophecy: “The virgin will have a son, who should be called ‘Emmanuel,’” which means, “God is with us.” Matthew 1:23

This is a switch. Throughout the Old Testament, God makes it clear that we are allowed only so close. In Exodus 19, for example, there were serious penalties for even touching the mountain where God was visiting. But here in Matthew, God chooses to do more than just visit. He chooses to move in with us, to hang out where we hang out, to live among us common folk.

I had a professor in college who was like that. He brought his wife and kids to class one day. Then he invited any of us who wished to come over to his house. So I went, along with a few other students. Wow! They were nice. They were regular people, so much unlike those who showed up for class and then disappeared into that mysterious world of the rest of their lives.

Why did God move in with us? The answer is clear. He wanted to be close. He didn’t want to go on being God at a distance. And so He did what it took to shorten the distance between us and Him. He remains God, beyond our understanding, beyond us in every category, yet Christ shows up as our elder Brother, as Family, as our Friend.

Bible trivia:
Answer from last time: The Magi (Wise Men) visited Jesus at least several weeks and more likely up to two years after the shepherds visited.
New question: Most likely, where did Jesus live as a three year old?